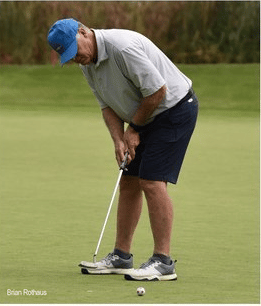 This year was for mom. Five Ponds Golf Club’s Brian Rothaus made it a point to celebrate the life of his mother, Beryl, by dedicating his 2021 season in her memory. That, paired with the sweet-swinging game of Rothaus, resulted in one of his most rewarding playing seasons to date.

Rothaus, the 1988 BMW Philadelphia Amateur Champion, battled his way to Super-Senior Player of the Year honors. His 512.5 points got the job done, giving Rothaus – and his family – another career highlight to cherish.

The season’s first two Super-Senior Majors hosted Rothaus rounds resulting in a T5 finish in the Frank H. Chapman Gup (Gross) (2-over 72) and T12 placement in the Francis B. Warner Cup (Gross) (6-over 76). This all after having not picked up a golf club for awhile after tending to his ailing mother’s side.

“I wasn’t really sure where my game was at that point,” said Roth[1]aus, of Elkins Park, Pa. “But I kind of just told myself I needed to get out there and give it a go. Both of those finishes were solid to begin the year, I thought.”

The 66-year-old’s signature moment came at a friendly establish[1]ment, Huntingdon Valley Country Club – a place he played “hun[1]dreds of times” growing up. Rothaus took home his first Super-Senior title in the Brewer Cup during a week of birdie bombs and legendary comebacks. In his quarterfinal match versus divisional legend Don Donatoni of White Manor Country Club, Rothaus stood 4-down with five holes to play. He’d go on to win the match on the first extra hole. Throw in a calf muscle injury around that time, and the Brewer victory almost seems surreal.

“The matches all week, they were unbelievable. I made a few insane putts. I had to take down some big names to win it. Versus Donatoni, it was great golf paired with good luck. I drained a 25-footer on No. 18 to tie it up and then another long one in the playoff to win it in sudden death,” said Rothaus, who, in the Final, defeated Overbrook Golf Club legend and recent GAP Hall of Fame inductee Chris Lange, 4&2, to hoist the hardware.

His season culminated with a Super-Senior Silver Cross Award (12-over 296) after a clinching performance in the Senior Amateur Championship at Country Club of Scranton. Rothaus’ runner-up fin[1]ish there, fueled with a pair of 2-over 74s, earned him the season-long honor. Rothaus would play his final 14 holes in 1 under, topped with a birdie on Scranton’s par-5 finisher to earn the Silver Cross crown by two strokes.

“The Silver Cross, that’s something I’ve always dreamed about. But I didn’t even think I had a shot at it. I didn’t really know where I stood so it was a wild finish,” said Rothaus. “It was unexpected but awesome to win it. It goes to show you how consistent you were all season.”

After his mother passed away in the beginning of the summer, Rothaus reflected on what the game truly meant to their relationship. When he was little, she would bring him out to a course, and the two would battle it out. She was always supportive, and encouraged Rothaus to compete.

“Up until she passed away, I was always able to talk golf with her. She’d always give me the perspective that I needed,” said Rothaus. “I wasn’t even sure if I was going to play early this season. So when she passed, I wanted to do it for her.”

He did it for her.

“I think she would have been proud of me, and I’m sure she was looking down and being a good influence. I really believe this summer was for her,” said Rothaus. “And I really believe she was kicking in some of those putts for me. Thanks, Mom.” – Dan Scofield